Ayurveda, the science of life, prevention and longevity is the oldest and most holistic medical system available on the planet today. It was placed in written form over 5,000 years ago in India, it was said to be a world medicine dealing with both body and the spirit. Before the advent of writing, the ancient wisdom of this healing system was a part of the spiritual tradition of the Sanatana Dharma (Universal Religion), or Vedic Religion. Veda Vyasa, the famous sage, shaktavesha avatar of Vishnu, put into writing the complete knowledge of Ayurveda, along with the more directly spiritual insights of self realization into a body of scriptural literature called the Vedas and the Vedic literatures. There were originally four main books of spirituality, which included among other topics, health, astrology, spiritual business, government, army, poetry and spiritual living and behavior. These books are known as the four Vedas; Rik, Sama, Yajur and Atharva. The Rik Veda, a compilation of verse on the nature of existence, is the oldest surviving book of any Indo-European language (3000 B.C.). 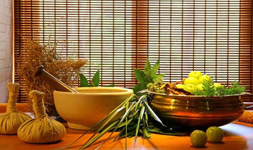 The Rik Veda (also known as Rig Veda) refers to the cosmology known as Sankhya which lies at the base of both Ayurveda and Yoga, contains verses on the nature of health and disease, pathogenesis and principles of treatment. Among the Rik Veda are found discussions of the three dosas, Vayu. Pitta and Kapha, and the use of herbs to heal the diseases of the mind and body and to foster longevity. The Atharva Veda lists the eight divisions of Ayurveda: Internal Medicine, Surgery of Head and Neck, Opthamology and Otorinolaryngology, Surgery, Toxicology, Psychiatry, Pediatrics, Gerontology or Science of Rejuvenation, and the Science of Fertility. The Vedic Sages took the passages from the Vedic Scriptures relating to Ayurveda and compiled separate books dealing only with Ayurveda.

One of these books, called the Atreya Samhita is the oldest medical book in the world! The Vedic Brahmanas were not only priests performing religious rites and ceremonies, they also became Vaidyas (physicians of Ayurveda). The sage-physician-surgeons of the time were the same sages or seers, deeply devoted holy people, who saw health as an integral part of spiritual life. It is said that they received their training of Ayurveda through direct cognition during meditation. In other words, the knowledge of the use of various methods of healing, prevention, longevity and surgery came through Divine revelation; there was no guessing or testing and harming animals. These revelations were transcribed from the oral tradition into book form, interspersed with the other aspects of life and spirituality. What is fascinating is Ayurveda use of herbs, foods, aromas, gems, colors, yoga, mantras, lifestyle and surgery. Consequently Ayurveda grew into a respected and widely used system of healing in India. Around 1500 B.C., Ayurveda was delineated into eight specific branches of medicine. There were two main schools of Ayurveda at that time. Atreya- the school of physicians, and Dhanvantari - the school of surgeons. These two schools made Ayurveda a more scientifically verifiable and classifiable medical system.

The theory behind Ayurveda involves science and medicine. Traditionally, Ayurveda stresses the importance of self-care and practitioners claim that treatments help maintain health and prevent illness, although they can also help a wide variety of health problems. Ayurveda stresses on perfect Lifestyle, simple procedures for preventive Health care and comprehensive management of chronic ailments and that is the reason it is proclaimed as the perfect holistic Health Science.

Swasthavritta is a science of Health, which prescribes the theory, and practice of the maintenance of public and private health. Swasthavritta in Ayurveda means maintenance of the health of an individual. The ayurvedic lifestyle followed during the yester years and the vitality of the people living then is proof in itself on how beneficial following a healthy regime is.

The rules and regulations in respect to maintaining proper well being of the physique are two-fold: i) Consumption of diet and ii) Observance of personal, moral, seasonal and spiritual conduct.

Swasthavritta mainly emphasizes on following a proper daily regime as well as seasonal regime. Daily regime deals with instructions for day-to day living like morning routine, basic cleanliness, natural urges, evening routine etc. Apart from this there are added features like the importance of medicinal smoking and tambula chewing. The seasonal changes and climatic changes also have a particularly important effect on the health. Hence Ayurveda has recommended a seasonal specific conduct. These activities help us to cope up with the changes in the environment.

Thus SVASTHAVRITTA means the behaviour or act by which a person can maintain health and lead a healthy life. Health and Longevity are certain to follow, if the rules of maintaining health, as given in Ayurveda, are strictly followed.

"Aturavritta "(Ayurvedic treatment) aims at not just alleviating/removing the problems of the diseased person, but then to see later that the same patient do not recur the same disease. Aushadhi Chikitsa i.e. treatment with medicines, Ayurveda discusses a huge, rich compendium of medication, basically natural in origin. The common myth about Ayurvedic medicines is that they are of herbal origin. But it also comprises medicines of mineral and animal origin such as gold, silver, copper, iron, milk, ghee, honey, musk, pearl, coral etc. and some times with a combination of these three groups. A more interesting part of Ayurvedic treatment is that it discusses its treatment along with four guide lines:

In Ahara, Ayurveda has described the properties of different foods, starting from daily food articles such as grains, pulses, and cereals to various other articles such as milk, buttermilk, ghee, water and so on. It gives definite rules about Do's and Don'ts of eating, for healthy eating.

In Vihara, it speaks about certain things that are to be undertaken and some of the things which are to be avoided. For e.g., Ayurveda always mentioned that 'Vyayamam' i.e. exercise, is to be carried out daily but also cautions that if one undertakes heavy, disproportionate work-outs/exercises, it will be harmful to the individual. Also, it also gives hints and do's and don'ts regarding sleeping patterns and several other things.

In Achara it stress on the mode of life style which needs correction so that present disease will not reappear later. Here patient has to discuss his lifestyle and has taken proper advice from the Ayurvedic physician for rearranging his styles in life.

In Vichara, it stress upon the distressing of the mind, modes of relaxation and how to solve the solvable problems and how to live harmoniously with the non-solvable issues.